Preserving the heritage and business of the commercial fishing industry 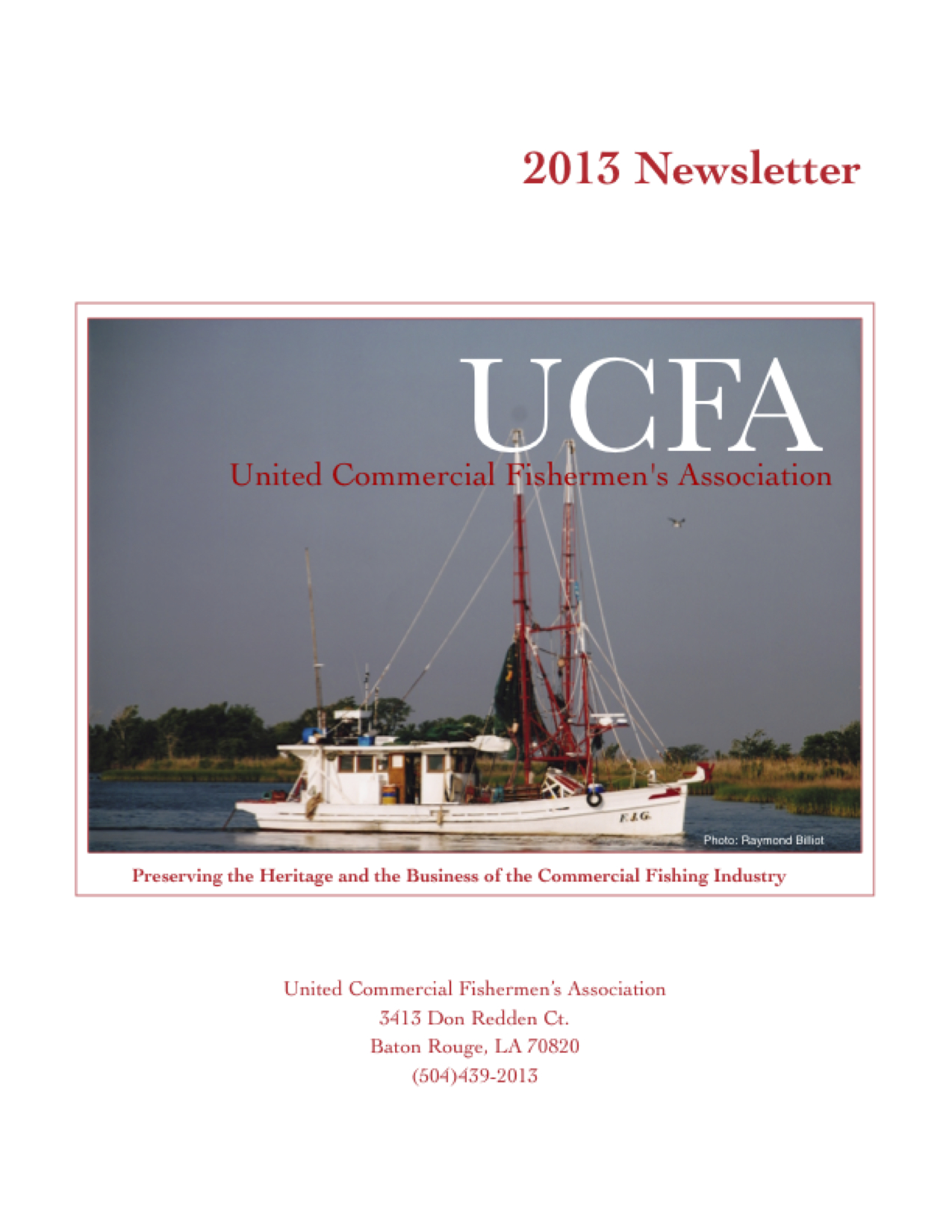 Letter from Michael Fredricks
Dear George,
I received the long newsletter yesterday. I was glad to hear that the association was still trying to hold together. I have been a member for a long time, and I am grateful for all that the association has done and has attempted to do. I read the article about how UCFA and other fishing groups managed to get BP and Fienberg to agree not to have the VoO payments come out of the future settlements. Thank you; in my case, I would have owed BP $10,000.
I knew that UCFA and LSA were on the front lines for us, so I took that $10,000 and reinvested it in my industry. I gave each association $5,000, putting up my share to help repay y’all for what y’all have already done and what you’ll have to do later on. Please use this money for whatever cause you think is most important.
Thanks for all that you do.
Michael Fredricks

Letter from Joe Barbaree
My Name is Joe Barbaree, I was a shrimper for 28 years. During this time I saw good times and bad times. Much of which I had no control over. In 1998 I heard of an organization called UCFA and was told it was mainly an oyster organization but also had shrimper members. That same year I met George at Mike Cure’s shrimp shed in Bayou Caddy Mississippi. I was trawling alongside George in Mississippi. I found it weird he picked up and left while we were catching shrimp. I later found out he left shrimp to go to a meeting in Alabama and was back trawling for dark. I knew he was one of us. I was convinced that this was an organization I should support. I joined on the spot. I paid the $25 and after asking George how we could do the things he was doing on dues alone, he told me dues alone really wasn’t enough and that they had a Defense Fund to help. I then gave $200 to the Defense Fund. $225 was lot of money for me to turn loose at that time. I have supported UCFA ever since and through the hard work George continues to devote to UCFA I am way ahead of what I put in. Having said this, it amazes me that so many fishermen benefit from all of UCFA’s efforts and have given so little back to sustain the Defense Fund.
Many of you may not know or remember it was George using his connections through U.C.F.A. and the Gulf Council who started the run for the anti-dumping petition against the countries with the pond raised shrimp. At first, the industry did not support him, then everyone wanted to get on board, processors and shrimpers side by side. It is a shame that a certain group wanted it done their way. If we would have followed George’s lead we would have had the tariffs 4 years sooner and at a higher percentage. It really bothers me that with all the millions the processors got in BYRD money that only a few are members. If U.C.F.A. would not have stuck it’s neck out none of us would have gotten a dime. When George decided it would be better to start-up Louisiana Shrimp Association and let both Associations work side by side he out smarted those who were going to crucify him claiming he wanted to be in charge. All George asked for was that those who shrimped just remain U.C.F.A. members at $25.00 per year. Only a handful stayed as members but U.C.F.A. never stopped working for the shrimpers. I wonder how much longer George will continue to fight for us, and if he gives up the fight, who will take his place, will they be as dedicated to us as George has been? Something to think about. I ask shrimpers and oystermen to help keep UCFA in the forefront of battles to come and we all know they will come. Thank you for taking the time to read this.

To all fishermen, may God bless you and your families and your boats afloat.
Knonk Joe

Tax-Exempt Resolution
The man-made BP catastrophe was recently declared as a “disaster of national significance,” and with that declaration, Congress is able to classify the BP payments as tax-exempt. The UCFA board determined the plan and vowed to push this issue for everybody’s benefit.
Last spring we initiated the project at the local level, securing unanimous votes from the parish councils supporting our request for a tax-exempt declaration. (See copy of resolution enclosed.) I have connections in other states whom will follow our lead. Whether or not this movement moves forward is up to you. You know what you paid in taxes from the 2012 or 2013 payments you may have received. I know the smart fishermen took whatever steps they could to pay as little in taxes as possible. If the second round is paid out in 2014 at the same predicted percentage as the first round, many of you will be looking at another substantial tax liability. We ask that you consider contributing to the Tax Exempt Political Action Campaign designed to eliminate our 2014 tax liability.
Look at it like this: our collective actions helped improve on the settlement that kept hundreds of millions of dollars in the fishermen’s hands with the VoO campaign. If we cannot collectively come up with the $1 million dollars needed to help the fishermen (you included) keep another potential $300 million dollars from the tax man, we can’t blame anyone but ourselves. There have been many projects I’ve steered through using UCFA funding, and many times over by using my own money. But this time around, UCFA does not have the funds, and I do not have the time, money, connections, or ability to pull this off on my own.
After I launched the campaign, I received numerous calls from members and non-member fishermen asking if the payments made in 2012 and 2013 would be tax exempted, and how come we did not start the initiative in 2012. My answer was this, “If it were not for the extra donations made by the members mentioned before, we would not have been able to pursue the exemption.” Whether we get to keep all of the second-round funding or not is up to each and every one of you.
At a recent LSA board meeting, I reported on updates concerning the campaign. One of the shrimpers asked, “How much are you asking for?” Another said, “The oyster people should pony up more since they got more.” My answer to them was the same as the answer I gave about the settlement offering: what you choose to contribute is an individual decision. Don’t look left or right, look in the mirror—what is it worth to you? And consider this: if there’s a possibly that you may not have to pay any taxes on the next round, or any subsequent lawsuits for those who opted out of the settlement, wouldn’t it be more cost-effective to put up a little bit of money now to keep the larger sum later of what you’ve been awarded? All the while taking money from the tax man and putting it where it may do some good.
If we are fortunate enough to raise the sufficient funds, we will hire lobbyists and publicists to keep you engaged and informed so that you, your friends, and your family can help us win this battle politically. But, more than anything, we need a commitment from you, as a member, of personal involvement and financial support.
Give George a call or drop him an email with your thoughts on the issue. nonetsnoseafood@aol.com

Large Scale Freshwater Sediment Diversions
Most of you are probably already aware of the implications and effects of the new and improved master plan to restore costal Louisiana. If the state pushes the master plan forward as it is currently written, there will be so much fresh (Mississippi River shit!) water in our estuaries that it will permanently alter your ability to make a living.
George Barisich has been serving on advisory panels for over 20 years trying to educate the state and fed on the real impact of proposed, large-scale diversions. Recently, George and Clint Guidry participated in the framework-development team to help design a restoration program that left the commercial fishing industry intact. Sadly though, that effort became yet another exercise in futility. When it became apparent that the token industry representatives on the team would never sign on to their proposed master plan, we were informed that a plan was already drafted, and that we would be able to see it only a week before it was to be released to the public. Understand they said we could view it—no changes we suggested would be considered.
At the insistence of industry representatives, numerous scoping meetings were held across the state. Over 90% of the public’s comments were against the implementation of large-scale diversions as a major component of the coastal master plan. Nonetheless, Garrett Graves and company continued to praise their plan as the only restoration plan that may work with only marginal impact to both commercial and recreational fishermen. The only positive result of our public criticism of the plan was that it woke up the sleeping giant, i.e. the recreational fisherman and the businesses that make their livings off of what we produce from the estuaries as they now exist.
Captain George Ricks (a charter boat captain and stage singer) and Mike Lane of Rod&Reel.com jumped head first into the fray. The Save Louisiana Coalition was formed with two goals in mind: to derail the proposed large-scale diversions and to persuade the powers that be that dredging would produce a positive result more immediately.
There is an application form for the Save Louisiana Coalition in this newsletter. We encourage you to join. Once again, there is strength in numbers. The industry still has many obstacles it must overcome, but having a strong, well-funded trade association is one of the effective weapons we can maintain in this war for survival.
For those of you whom did not pay the 2013 Dues and Defense Fund, please consider doing so. Membership in any trade association accounts for only 20% collectively of fishermen across all fisheries. If you have any friends or associates who benefitted from any of our efforts over the last 20 years, reach out to them, and share the information you have just read. Who knows; they may finally see the light at the end of the tunnel.
Take care.
The UCFA Board

A special thanks goes out to Robert Campo, James Kieff Jr, Henry Martin, Ray Vath, Mike Cure, Glen Mankin, and Dean Blanchard for generous donations of seafood whenever the association needed it.

Theme by Anders Noren — Up ↑